In this mapping series I will try to explain how to do different types of structure mappings in AIF. AIF’s mapping engine works in a different way as SAP PO, Service/SOA Mapping Tool (SMT) and Business Connector so it would be good to understand how to use it properly in your new integration projects. In case you’d know a different way (easier/better, etc.) to solve the same requirement as shown in the article please post a comment so we will have a single source where all AIF mapping best practice is shown.

There are situations where we need to create two or more lines from a single input line. A typical example of such a case might be when we need to map an input structure to an IDOC with multiple qualifiers. How to do this sort of mapping in AIF ?

Imagine we have a table structure with two types of rates: rate type M and rate type B are available in a single row or this structure as shown on Figure below. I’m using the exchange rate example as it’s available on most of the SAP application systems. 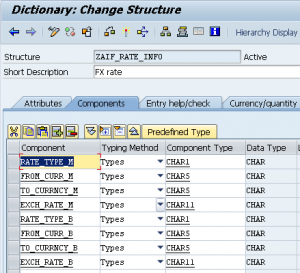 We need to map this to the standard IDOC with exchange rates where each rate needs to be mapped as a single row with a rate type (M or B) as a segment qualifier. 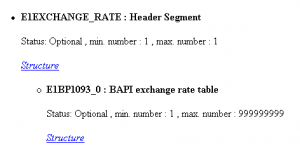 This means that for each row of the input structure we need to create two rows in the IDOC struture : E1BP1093_0.

We need to start by creating a target structure for E1EXCHANGE_RATE as shown in Figure below. 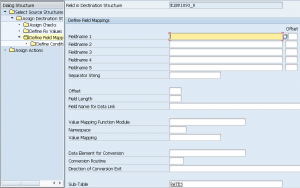 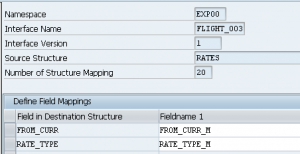 After we’d done with the mapping we can use the AIF testing tool to test if the mapping works correctly. The source structure contains two rows, each with two types of rates (M and B) as shown in figure below.

The target structure contains twice as many rows as the source structure due due to the requirement which was saying that each of the rate types needs to be created as a separate segment E1BP1093_0.

I hope the example will be useful for those starting with AIF mappings. If you’d have any comments, please do let me know. 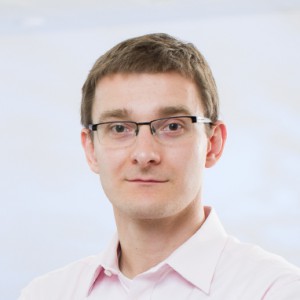